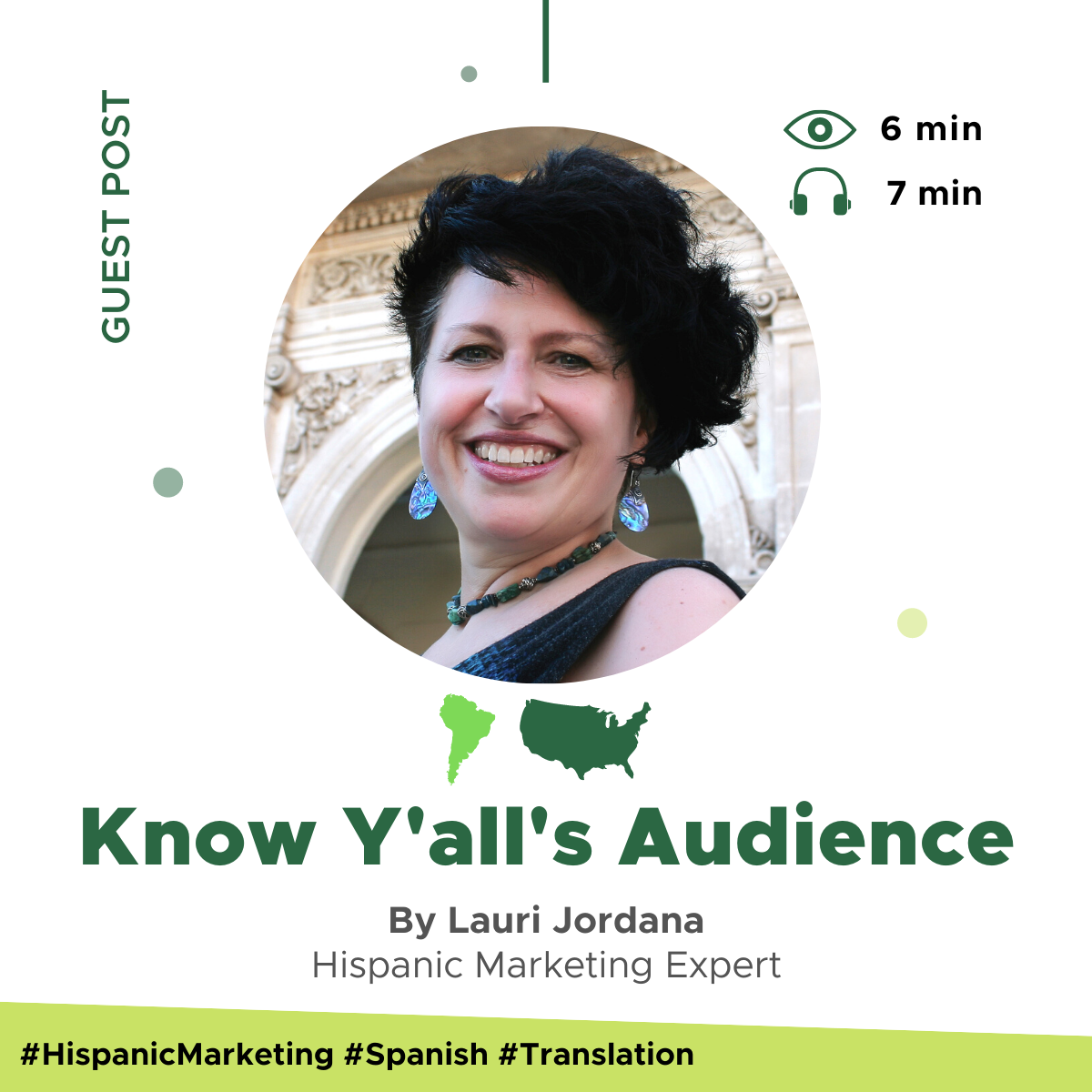 🎧 No time to read? Hit play and listen to this blog post in Lauri’s voice.

When fictional Coach Ted Lasso crossed the pond to manage a football team in London, he was surprised to learn how much sports language differed there compared to the U.S. Instead of wearing uniforms, these guys in England wear kits. What we call practice in the U.S., they call training. And while athletes in the U.S. play on a field, in England it’s called a pitch. Not to mention the usage of the word football around the world to mean soccer, and not American football. Of course, the differences between British and American English aren’t limited to sports.

And regional variances aren’t limited to English, either; for instance, you’ll also see differences between Spanish spoken among the various regions of Latin America. Need to talk about popcorn? That seems simple enough. Well, depending on your target audience—and where they are, or where they’re from—you might use palomitas, pochoclos, cotufas, crispetas, pororó, rosetas, or perhaps another term!

Using the right language for your audience is critical, whether you’re selling popcorn or communicating something more complex. Before we begin work on any communications—in any language—we identify the intended audience. In the same way that “Location, Location, Location” is key in real estate, knowing your audience gives you a road map for how to most effectively market to that target. Incorporating that familiarity in your execution shows your audience that you don’t just know them; you get them. And of course it also helps dictate the distribution of your message via the right channel, so you’re right where your audience naturally is.

Your audience may comprise avid readers, but for best results you’ll take that targeting even further. If your sweet spot is actually females 18-24 who devour sci-fi on their tablets, this provides much clearer direction when briefing the creative team.

Similarly, if this message is to be translated into Spanish, that requires another layer of briefing for the translation agency. Who exactly is your Spanish-speaking audience? What cultural and linguistic elements need to be considered to best capture their attention and engage them to act?

I remember working on an awareness campaign around the Zika virus, which is transmitted by mosquitoes. Early focus group discussions unveiled an interesting fact: Local Latinos here in Washington State didn’t use the Spanish term mosquitos to mean mosquitoes. For them, the Spanish term mosquitos referenced what we call gnats. And what we call mosquitoes, they actually called zancudos. Because the desired result of this campaign was to reach and educate our local community on this critical public health topic, it was essential for us to accurately convey the information. Fortunately, this research helped us pinpoint our audience’s language, and we were able to then apply the correct term for clear understanding.

Get to know your end consumer in a meaningful way, so you can craft your communication with their particular preferences in mind—no matter the language. By incorporating target culture and regionalisms in the language we use, our messages can better resonate with our target. And when the language resonates, consumers are more likely to engage and take the desired action.

Can you imagine, instead, trying to engage, educate or sell to your particular audience without keenly understanding their linguistic preferences? At best, it’s a waste of time and money. Worst case, you’ve created space for the competitor. Or, in my latest example, the Zika virus.

Like mosquito, remember the multiple options for popcorn? If we’re connecting with people in a specific country, professional translators know to incorporate the specific terms people in that country customarily use. This goes for the various regions within that country, too.

Think about how in U.S. English we have different terms for the same thing based on the region, such as regional terms for soft drinks. As a Seattle native, I always knew it as pop. A national survey on soft drink terms shared respondent preferences that were later published on Huff Post. Take a look at this map! I just learned that, in southern states, Coke is used for all soft drinks, whether a Coca-Cola product or not!

When your target is limited to a determined geographic area within a country, those regional differences must be understood—for just about every country and every language. Translators working to connect with a particular region will take an uber-localized approach, relating to this audience based on cultural and linguistic insights specific to that region.

If we are talking to Spanish-speaking folks based in the U.S., a fundamental understanding of the target consumer is also required. For starters, does your target skew Caribbean or Mexican, for example, or is it more broadly U.S. Hispanic? How long has your target audience been living in the U.S.? At what age did they arrive, if they weren’t born here? What education have they attained?

Answers to those questions will help you uncover their level of acculturation, which can facilitate a better understanding of whether your consumers prefer communications in Spanish, English or a combination.

For the broader Spanish-dominant audience in the U.S., a specialized approach is in order; it’s generally referred to as U.S. Spanish or neutral Spanish. In a nutshell, while it may not represent how all of your audience members actually speak (or eat, or celebrate, or behave, etc.), it is broadly understood across Spanish speakers in the U.S. and unlikely to get you into trouble. It takes into account the cultural, societal and linguistic similarities across Latin America (and potentially Spain), and how they’ve simmered in their own melting pot here in the States. The language you land may even include a little Spanglish! Meet your consumers where they are.

And meeting them where they are includes understanding how your target audience prefers to be addressed. In Spanish and some other languages, there are different ways of addressing others based on cultural norms and the relationship you hold. Would your target expect you to use the formal usted, or the more familiar tú?

When AT&T Wireless launched in 2000, we relied on a more formal tone for continuity with the mother ship, following suit with how AT&T historically addressed its Spanish-speaking audience. Later, when I was in business for myself, I worked closely with bank and insurance clients. We advised addressing U.S. consumers from Latin America formally in those instances, too—to instill credibility and build confidence for industries that may either be unfamiliar or worthy of distrust in their home countries.

T-Mobile here in the U.S. makes for a perfect case study in bucking the norms. As the Un-carrier, and carrying all the swagger of the brand’s big personality, T-Mobile broke the industry mold, establishing a much more informal and relatable tone in its Spanish communications. We knew our target consumer could get on board and, because this approach mirrored the way the brand talked to customers in English, our treatment of the language remained authentic to the brand. Like Ted Lasso regularly addressing folks as “y’all,” even in the show’s British setting—that’s his brand, no matter which side of the pond he’s on. At T-Mobile, we were all about breaking the rules, and that extended to our language choices. It paid off, in part because we were aligned with our target consumer.

Discovering the nuances of your intended audience is key to crafting messaging and ultimately landing language that truly connects with your intended audience. While copywriters require a detailed brief to know whether these avid readers are also young, female sci-fi fans who consume material digitally, translators additionally need to have a clear understanding of their audience makeup.

If you’re Ted Lasso, while you may not be accustomed to the flavor of traditional English tea, you recognize that—to best engage your players—you do need to find ways to build common ground. Gain their confidence by speaking their language.

When you uncover deep-dive data points for your target audience and share this information upfront with your creative and translation agencies, you’re giving the ultimate gift by helping them effectively craft the optimal language for your consumer.

And with the right language, you can engage this important and nuanced audience in the right way and meet your communications and business objectives. A Happy Christmas, and Happy Holidays all around! 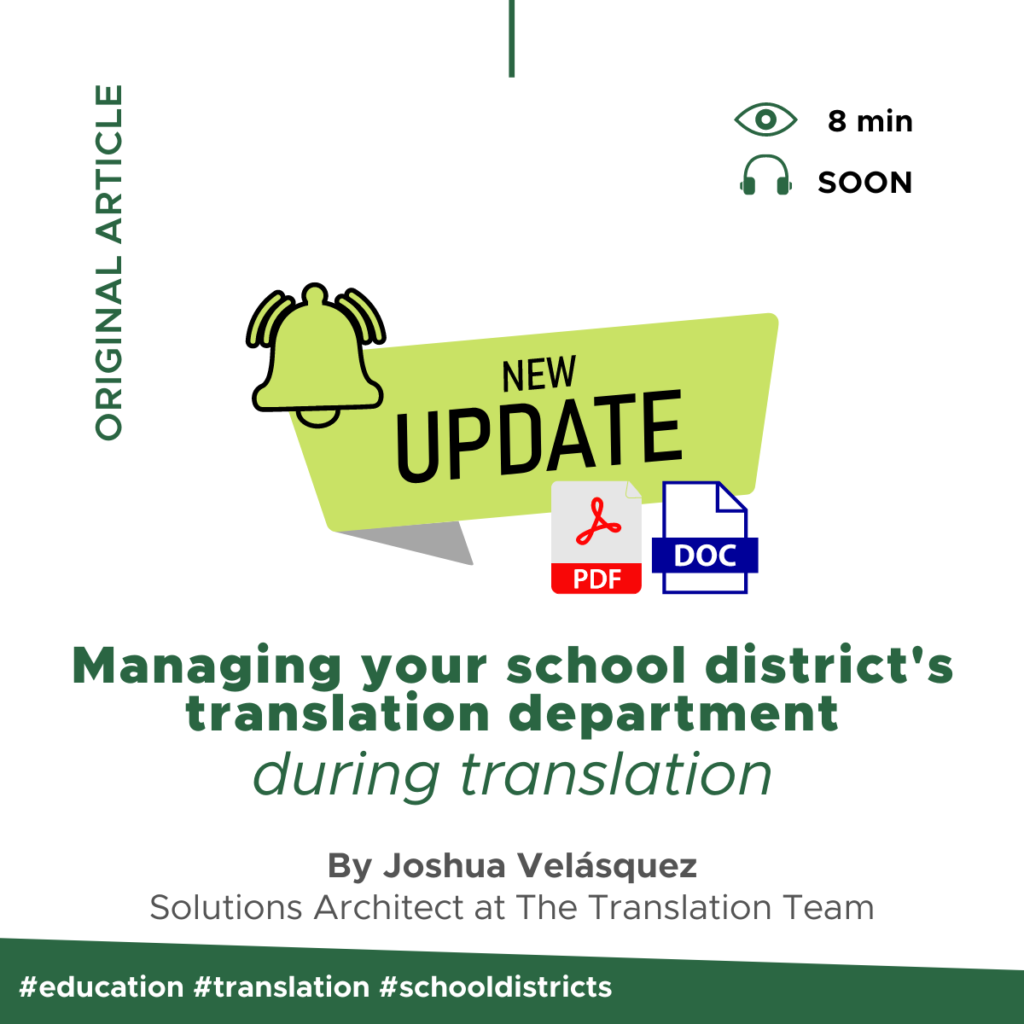 In the first part of our series, we explained the core elements of a school district translation department and how they represent an abstract moment we call before translation: A clean and structured file management system and a semi-automated form and spreadsheet for request handling and tracking.A consolidated knowledge base paired with computer-assisted translation technologies (translation memories and termbases) to… 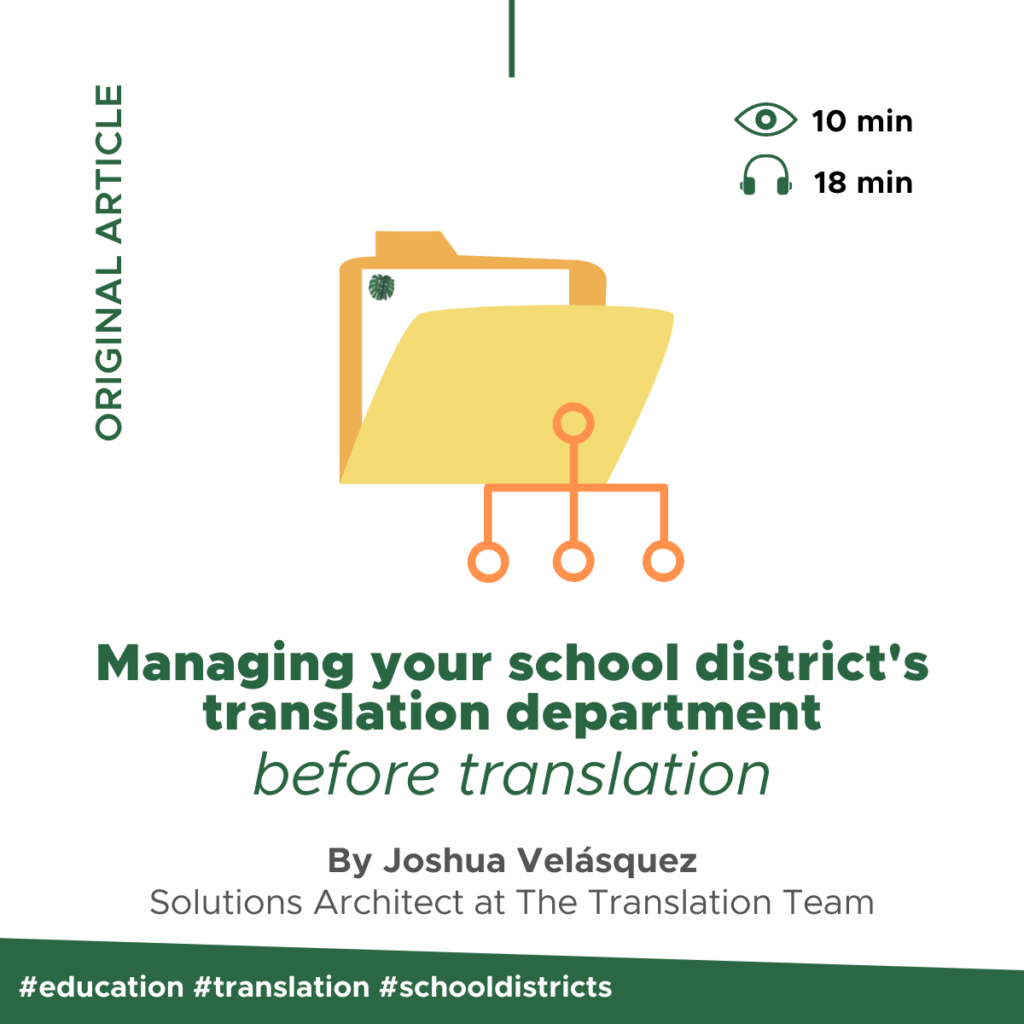 One of the biggest challenges for small and large school districts with in-house translation teams is how to effectively manage the translation process. 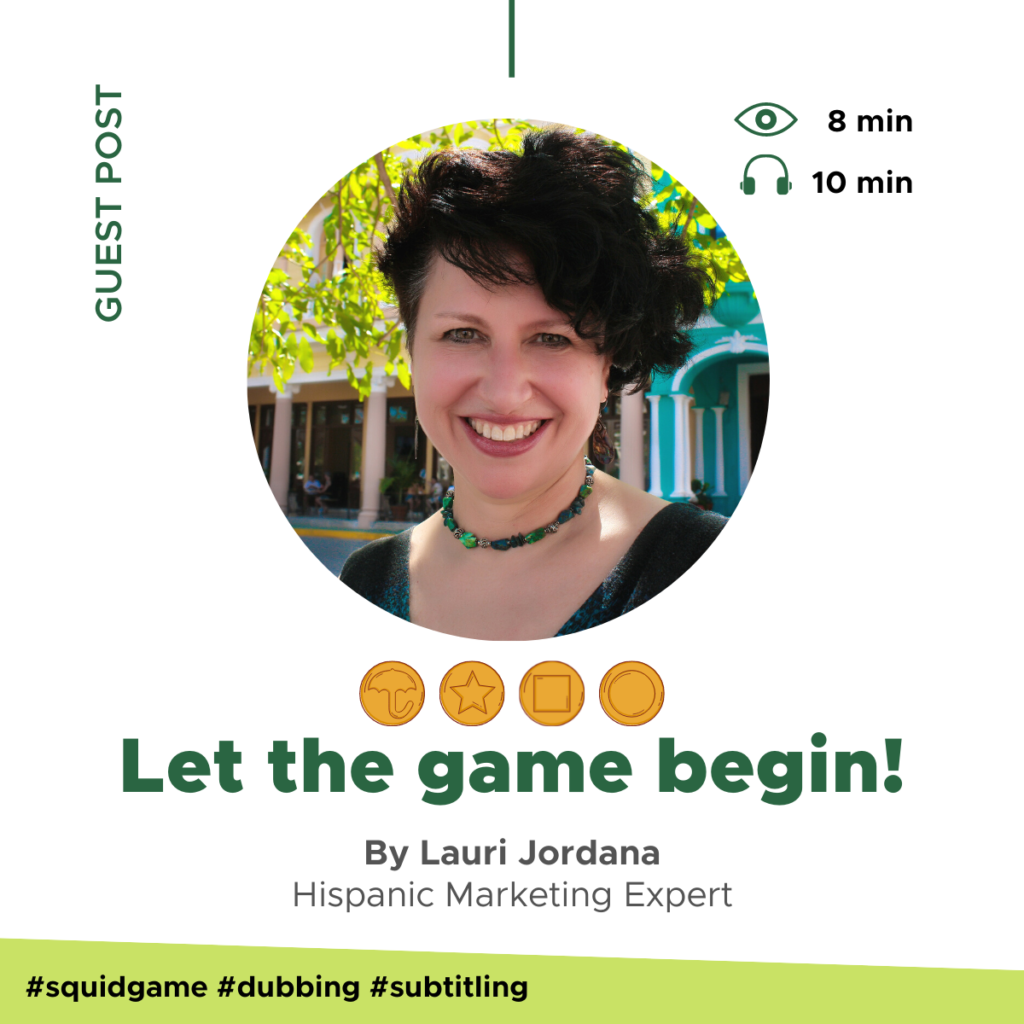 It may be the most polarizing series on Netflix, but Squid Game quickly surpassed even Bridgerton—and Lupin. Part 1 (from France) and Money Heist (or Casa de Papel, from Spain), before that—as the most-streamed series on the platform, globally.

Lauri JordanaNovember 4, 2021
We use cookies on our website to give you the most relevant experience by remembering your preferences and repeat visits. By clicking “Accept All”, you consent to the use of ALL the cookies. Read More.
Accept All
Manage consent

This website uses cookies to improve your experience while you navigate through the website. Out of these, the cookies that are categorized as necessary are stored on your browser as they are essential for the working of basic functionalities of the website. We also use third-party cookies that help us analyze and understand how you use this website. These cookies will be stored in your browser only with your consent. You also have the option to opt-out of these cookies. But opting out of some of these cookies may affect your browsing experience.
Necessary Always Enabled
Necessary cookies are absolutely essential for the website to function properly. These cookies ensure basic functionalities and security features of the website, anonymously.
Functional
Functional cookies help to perform certain functionalities like sharing the content of the website on social media platforms, collect feedbacks, and other third-party features.
Performance
Performance cookies are used to understand and analyze the key performance indexes of the website which helps in delivering a better user experience for the visitors.
Analytics
Analytical cookies are used to understand how visitors interact with the website. These cookies help provide information on metrics the number of visitors, bounce rate, traffic source, etc.
Advertisement
Advertisement cookies are used to provide visitors with relevant ads and marketing campaigns. These cookies track visitors across websites and collect information to provide customized ads.
Others
Other uncategorized cookies are those that are being analyzed and have not been classified into a category as yet.
SAVE & ACCEPT